Dana Mahmoud is a Palestinian refugee in Norway.
She has a bachelor degree in business administration, but as a refugee, she has no right to work.
So she works as a freelancer and volunteer for Ufree, The European Network to Support the Rights of Palestinian Prisoners (UFree).
Here is her story as told by Women News Network, the Norwegian newspaper Dagsavisen, the Islamic Human Rights commission and in a Radio interview (in English).


To whom it may concern

My family is originally Palestinian from Haifa. My grandparents (from both sides) were born in Haifa, which is now part of Israel. In 1948, during the conflict that followed the 1947 United Nations General Assembly Resolution 181 (11) ‘Future Government of Palestine’ (also called the Partition Plan for Palestine), my grandparents, on both sides, left for safety to Basra, Iraq. For 6 months they were in flight because of the violence and death that broke out in the Haifa region. Then they moved to Baghdad, Iraq.
I call myself a Palestinian Iraqi female. I used to hold an Iraqi document that allowed me to legally live in Iraq and other countries, including the UAE – United Arab Emirates. This document was valid for me and my family until 2006. That was when the new Iraqi Government took over. It was this government that decided not to renew our document. Why?

Because our family suddenly became the wrong (Sunni Muslim) religion. As a result of this action my family and I became stateless.

Let me give you some of my history: My dad (born in Haifa) and my mother (born in Baghdad) met in Baghdad in 1977. After marrying they moved to the UAE where I, and my 3 sisters, were born. My dad was an electrical engineer who worked in the UAE Ministry of Information and Culture. My mother worked for the UAE Ministry of Health.

We had a very normal and good life until 1989 when my dad discovered that he has lung cancer. He was in and out of hospitals for treatment for almost 10 years. In 1997, my father passed away.
It was then our lives started to be really bad.

We had to move from our big house to a small house, 60km away, losing many of the privileges we had from my dad’s job. Having nothing except faith that one day I’ll achieve something, I continued to work and study toward my university degree.

It was like that. I worked as my sisters finished high school. Two of them got married, as I and the youngest stayed home continuing to work and study.

In 2006, when our documents were no longer valid, everyone in my family was suddenly not legal anymore in the UAE (or any other country for that matter).
We started to look for a legal way out.

During this time, one of my sister’s had gone to Syria after she and her husband, and his family, were forced to flee Iraq. After starting a small business between Iraq and Syria my brother-in-law was bombed on the road one day. We don’t know who did this to him. My sister was pregnant at the time, with a son, and she fled quickly alone to Cyprus applying for asylum there. Since November 2008 my sister and her son have been living in Cyprus.
In 2008, I applied for asylum, in Norway, for myself and my family. But we were refused legal permissions.

In the process I applied with the UDI – the Norwegian Directorate of Immigration. We were refused after 22 months of waiting. I appealed the decision, but it was rejected. Why?
For two reasons: Because our 1948 document of permissions from Iraq had been discontinued. Also, because we came to Norway, not from Iraq, but via the United Arab Emirates. Because of this, were not considered war victims.

Even though our family had been running from war for generations.
To find assistance, I tried to contact the Palestinian Embassy and the Iraqi Embassy in Stockholm. My mother, my younger sister and I wanted to see if there was any way that we could just go back to where we had lived before. We wanted to do this before we were rejected again by the Norwegian government, but both embassies told me, “It’s not possible,” we could not return to the UAE or to Iraq legally.

The Palestine Embassy informed us that they could not help us because we were not part of a Palestinian family coming from Gaza. The Iraqi Embassy told us that no one could return back to Iraq once they had stayed over 6 months outside the country.

Even on making contact with the UNHCR – United Nations Refugee Agency to ask for help, they offered us little options, saying we should apply to live in UNHCR camps in Turkey or Syria.
Today our new appealed case is coming before the Norwegian Immigration Appeals Board. We pray every day for a resolution to this situation.

We feel we have been left with no life. We have no passports. No way of legal travel. No valid residency. No official recognition from the countries of our past. No recognition inside the country of our future – Norway where we now live.

Now our future is vague. We are adrift, in pain, with no legal place to go. We are stateless and paperless.  I'm currently working hard to help myself and family to stay and live legally in Norway.
I’m not a kind of person who give up easily or feel broken because of small incidents that happen to me, but feeling the huge responsibility on my back toward my family and toward every Palestinian Iraqi who can’t speak for him/herself make me wonder what should I do and where should I turn to, I contacted few media outlets in Norway, Europe and even the middle east to help me spreading the world, I might be away from all the revolutions that happening in the middle east but I feel I’m leading my own revolution against double standards, and how on one hand many countries claiming that Palestine and Palestinians  have their full financial and political support, while 800 Palestinians in Norway alone are paperless and stateless millions around the world still living in refugee camps.
If you really want Palestine to be an independent country one day, let her sons and daughters live a decent life, get their share of education and health care, then and only then they can defend their rights and stand to declare their Own independent state. 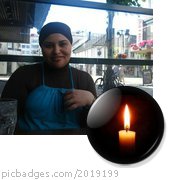 "Dana’s family is originally from Haifa, a part of Palestine now claimed by Israel. Her grandparents moved to Iraq in 1948, fearing their safety, following the 1947 United Nations General Assembly Resolution 181 (11) ‘Future Government of Palestine.’

Dana Mahmood, described by herself as a Palestinian-Iraqi female, held a legal document allowing her to live to Iraq and other countries including the United Arab Emirates (UAE). Her document expired in 2006, when the new Iraqi Government took over and decided not to renew it, making her and her family stateless.

Dana’s parents married in Iraq and moved to the UAE where her and her three sisters were born. After an episode of lung cancer, her father passed away in 1997 leaving his family helpless.

In 2006, when their documents expired, they searched for a legal escape. Dana applied for asylum in Norway, in 2008, only to be rejected for two reasons. Firstly, their 1948 document of permission from Iraq had been discontinued, and secondly, since they had been living in the UAE, not Iraq, and were therefore not considered as victims of war.

Dana was desperate for help. She contacted both the Palestinian and Iraqi Embassies in Stockholm. The Palestinian Embassy could not offer help since they did not come from the Gaza strip, and the Iraqi Embassy told them they could not return to Iraq after living abroad for over six months.

On 2 August 2011, Dana’s newly appealed case was faced with a final rejection, leaving her and her family helpless. Dana says she feels as though she has been ‘left with no life’ with no valid residency or official recognition from the countries of their past and the country in which they currently live – Norway.

Dana says “Now our future is vague. We are adrift in pain, with no legal place to go. We are stateless and paperless. I'm currently working hard to help myself and family to settle down in a country that I can call home without fearing being deported...”

Radio interview from Dana (in English)