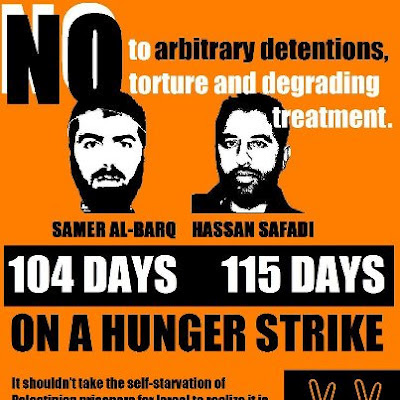 SAMER AL-BARQ: 104 DAYS on a renewed hunger strike (74 days + 30 days earlier), note there was a break that lasted only a WEEK in between the strikes!

HASSAN SAFADI: 115 DAYS on a renewed hunger strike (44 days + 71 days earlier), with a br
eak lasting a bit over a month in between.

'..."At 2 a.m., (Safadi) was in bed when jailers attacked him and forced him to stand and tore his clothes up and his mattress and pillow. When he tried to resist one of the jailers punched him in the face and fought with him until an officer intervened," Boulos said in a statement.

The prison administration transfered al-Barq to another prison. Using a wheelchair due to his poor health, guards at the jail asked him to stand up and walk, and when he was unable to they threw him to the ground, Boulos said.

He was sent to a clinic due to his health condition.

Administrative detainees can be detained without charge or trial based on 'secret evidence' for up to six months, and the detention orders can be renewed indefinitely.

'Although international human rights law permits some limited use of administrative detention in emergency situations, the authorities are required to follow basic rules for detention, including a fair hearing at which the detainee can challenge the reasons for his or her detention.'

' Indeed, the denial of a fair trial constitutes a ‘grave breach’ of the Fourth Geneva Convention. Furthermore, the European Parliament called on Israel in a September 2008 resolution to “guarantee that minimum standards on detention be respected, to bring to trial all detainees, [and] to put an end to the use of ‘administrative detention orders’.” The United Nations Human Rights Committee has stated several times that prolonged administrative detention is likely to result in the exposure of detainees to “torture, ill-treatment and other violations of human rights.”'
http://www.alternativenews.org/english/index.php/news/news/4836-urgent-action-to-save-palestinian-hunger-strikers.html

*****
'It shouldn’t take the self-starvation of Palestinian prisoners for Israel to realize it is violating their due process rights. Israel should stop holding prisoners for extended periods without charge.'
-Joe Stork, deputy Middle East director at Human Rights Watch

*****
'Calling on them to release Samer al-Barq, Hassan Safadi and all other administrative detainees immediately, unless they are promptly charged with internationally recognizable criminal offences and brought to trial in proceedings that meet international fair trial standards.'