A Hunger for Justice in Pelican Bay 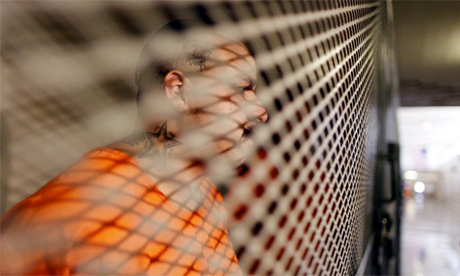 On 21 July, prisoners in solitary confinement at California's notorious Pelican Bay State Prison began accepting the meals that were slipped to them through slots in their solid mental cell doors. For many, it was the first time they had eaten in three weeks. A group of inmates in the prison's security housing unit (SHU) had resolved to protest their isolation using the only means available to them – by going on a hunger strike. The strike quickly spread to more than a third of California's 33 prisons, where about 6,600 prisoners refused at least some of their meals. After 21 days, with some prisoners losing as much as 30lb (14kg), the strike ended where it began – in the Pelican Bay SHU.

If this seems like a desperate measure by desperate men, it is. The widespread use and abuse of solitary confinement in US prisons and jails is one of the nation's most pressing domestic human rights issues, and also perhaps its most ignored. In the end, the Pelican Bay hunger strikers won only a few token concessions from the California department of corrections and rehabilitation (CDCR) – the right to wear caps in cold weather, to hang wall calendars in their cells, and to have access to a modicum of educational programming.

But they achieved something much more important, as well: For a few weeks, the men of the Pelican Bay SHU ceased to be invisible.

Solitary confinement is a hidden world within the larger hidden world of the American prison system. At Pelican Bay, about 1,100 men languish in long-term or permanent isolation. In supermax prisons across the country, the number is at least 20,000, with tens of thousands more in solitary in "special housing units" or "administrative segregation" in other prisons and jails. Most are confined to their cells without yard time, work or any kind of rehabilitative programming. In the Pelican Bay SHU, prisoners spend at least 22.5 hours each day in windowless concrete cells, and the remaining time alone, in concrete exercise yards. Many have been there for years, and some for decades, often with no end in sight to their torment.

Solitary confinement has been denounced as torture or "cruel, inhumane and degrading treatment" by several international bodies, including the United Nations and the European Court of Human Rights. Research conducted over the last 30 years confirms that stretches in solitary produce psychopathologies that include panic attacks, depression, inability to concentrate, memory loss, aggression, self-mutilation and various forms of psychosis. But in the United States, the courts have been reluctant to limit its use. In the 1995 case Madrid v Gomez, a federal judge sharply criticised conditions in Pelican Bay's SHU, writing that nearly round-the-clock isolation in windowless cells "may press the outer borders of what most humans can psychologically tolerate". Yet, he fell short of declaring long-term solitary confinement unconstitutional.

Largely unrestrained by courts, legislatures or public opinion, solitary confinement has become routine – a punishment of first resort for all sorts of prison infractions. Today, a prisoner can be placed in solitary not only for violence, but for any form of "insubordination" towards prison officials, or for possession of contraband (which includes not only drugs but cell phones, cash or too many postage stamps). Some inmates are sent to solitary confinement for exhibiting the symptoms of untreated mental illness. Others, including juveniles in adult prisons, end up in isolation for their own "protection" because they are targets of prison rape. Many of the men in Pelican Bay's Security Housing Unit are there because they've been "validated" as gang members, based on their tattoos or on the say-so of other inmates, who are rewarded for "snitching".

In 2006, as one of its primary recommendations, the bipartisan US Commission on Safety and Abuse in Prisons called for substantial reforms to the practice of solitary confinement. Segregation from the general prison population, it said, should be "a last resort", and even in segregation units, isolation should be mitigated and terms should be short. The Pelican Bay hunger strikers adopted the commission's recommendations into their core demands, along with an end to the system of gang "validation", and provision of "adequate food" and "constructive programming" for SHU inmates. The demands were far from radical. Yet a spokesperson for the California department of corrections and rehabilitation insisted that the state was "not going to concede under these types of tactics".

While its tangible results were few, the hunger strike received surprisingly widespread press coverage, in spite of the CDCR's complete ban on media access to participating prisons and prisoners. And the visibility wrought by the hunger strike builds upon the work of a growing number of advocates. Earlier this year, the National Religious Campaign Against Torture issued a statement calling for an end to prolonged solitary confinement across the nation, and urged people of faith to sign on. They joined the American Civil Liberties Union and American Friends Service Committee, along with several smaller or state-based groups, in opposing solitary confinement as it is practised in the United States today.

If the public at last begins to acknowledge long-term solitary confinement as a form of torture and a major human rights issue, it will be owing largely to the efforts of these activists – and to a group of prisoners who, for a few weeks this summer, starved themselves in solitude to bring their torment to light.