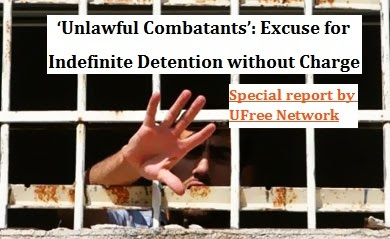 The right to liberty is one of the pillars of human rights. International law –most significantly, the Geneva Conventions and International Covenant on Civil and Political Rights – state unequivocally that imprisonment without opportunity for appeal is a breach of the fundamental principles of justice. However, the Israeli occupation has detained Palestinians without charge or trial for years, and attempted to legitimize the practice with the adoption of the Internment of Unlawful Combatants Law in 2002.

Because the law allows detainees to be held as long as actions labeled as “hostilities against Israel” continue, the government can imprison individuals for an unlimited period of time without trial, since the occupation of Palestinian territories the Israeli government shows no sign of being willing to negotiate a mutually acceptable end. In fact, although Israel ratified the International Covenant on Civil and Political Rights, it stipulated simultaneously that, from the time of its founding in 1948, it has been in a state of emergency that justifies exceptions.

Israel’s Unlawful Combatants Law was conceived to enable the state to circumvent a ruling of its Supreme Court in 2000, which ruled illegal the detention of Lebanese men held hostage for more than a decade. Just prior to Israel’s 2008/09 offensive on Gaza, more than 900 Palestinians from the Gaza Strip were detained in Israeli prisons, serving sentences for “security” offences and deprived of family visits. During and after the attack, 14 Gazans were detained in Israeli prisons under the Unlawful Combatants Law, with an additional four held even after completing jail sentences.

Numerous cases highlight Israel’s use of the law to detain Palestinian citizens who – contrary to Israeli charges of “terrorist affiliations” — have merely been helped by Hamas-sponsored social programs.

Three specific laws allow Israel to hold Palestinians indefinitely without trial: the Order Regarding Administrative Detention, which is part of the military legislation governing the West Bank, the Emergency Powers (Detentions) Law, which applies in Israel and the Internment of Unlawful Combatants Law.

Israel relied upon the first two laws for many years. The Unlawful Combatants Law was adopted in 2002 – initially to allow the government to imprison Lebanese nationals for use as “bargaining chips” during negotiations for the release of Israeli prisoners of war. Today, however, Israel uses the statute to detain Palestinians.

The Law in Practice

The law allows the chief of staff of the Israeli military to detain any foreign national believed to be “taking part in hostile activity against Israel, directly or indirectly” or “belonging to a force engaged in hostile activity against the State of Israel.” All detainees held under the law are automatically assumed to be a security threat and can be held without charge or trial as long as the hostilities against Israel continue. In other words, the law licenses the military to hold individuals arbitrarily and indefinitely, on the basis of assumption rather than proven guilt. As the Al Mezan Center for Human Rights observed in a 2009 report, “nurses working in a

It is left to the detainee to show that he or she does not endanger state security, contrary to the fundamental principle that a person is innocent until proved otherwise. However, such proof is virtually impossible, considering that the vast majority of the material used to support the charges against the person “privileged,” giving him or her no opportunity to examine the evidence against him.

The legislation, as well as an amendment passed in 2008, does somewhat regulate the conditions of the internment. For example, within 14 days of being detained, the prisoner must be brought before a district court to determine whether he or she is an unlawful combatant. However, in practice, this requirement is often ignored. During the 2008/09 offensive within Gaza, Israeli soldiers ordered most of their prisoners to stay in their homes for days to weeks. When they were later taken to Israel, this period was not included in their official detention time. In addition, a high-ranking military officer or judged can – if they consider state or public security to be at stake -prohibit attorney meetings for 10 to 21 days, respectively. (The stipulation that a defendant must be brought before a military judge within 14 days still remains; however, if the defendant is prevented from seeing a lawyer before the court date, he or she is brought before a judge a second time once he has access to a lawyer.) Detainees who are given the status of unlawful combatant must be re-evaluated every six months by a district court judge, the Shin Bet and the military.

In 2008, two Gazans detained in Israel for allegedly providing support to Hezbollah challenged the law in the Israeli Supreme Court. However, the court found that the purpose of the law is “worthy and based on the public’s need, which may justify violating personal freedoms.”

Cases such as that of Hamid Al Attar demonstrate otherwise. According to Al Mezan, Al Attar, a 29-year-old, half-blind teacher at the Al-Nour wa Amal (“Light and Hope”) school for the blind, was arrested on 4 January 2009. During the court proceedings, the prosecution’s only evidence in support of his detainment was that the school, at which he worked as a teaching assistant for five months, is government- run and therefore his salary comes from the Hamas-led government. He was ruled to be an unlawful combatant on March 5 of that year and is still being detained. In the court’s decision, the judge stated that he was convinced that the young man had been in
“contact with senior activists from Hamas, although no such evidence had been presented.

Al Mezan also cites the case of Hamouda Abu Oun as an example of the illegal, retroactive application of the law. Abu Oun completed a sentence of 5.5 years for being a member of the PLFP. As his release date neared, he was told that he would not be allowed to leave unless his family paid a fine of NIS 15,000. Two days before his scheduled release, his family paid the penalty and stood waiting to greet the young man for eight hours at the Erez passage from Gaza into Israel. At 4 p.m., on 21 January 2009, they were informed that he had not been released because he was now being held under the Unlawful Combatants Law. The fine was not returned.

“Israel: The conflict in Gaza: A briefing on applicable law, investigations and accountability.” Amnesty International, 19 January 2009.