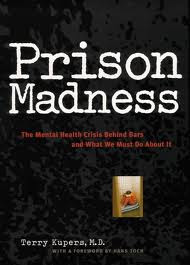 The prisoners' five core demands in the July hunger strike were actually very well thought out, and closely reflect trends in the scientific literature. In other states, legislation has been passed regulating the use of solitary confinement in the prisons (New York and Maine stand out, Illinois is considering a Bill). The California legislature could pass ground-breaking legislation that would go a long way toward ending the unconstitutional conditions and programs in the SHUs. I will list a number of possible components of such legislation, pretty much in sync with the five core demands of the hunger strike.

First, a few words about security. You will encounter complaints from law enforcement agencies and the department of corrections that any and all changes you propose would create a security threat too serious to permit. Actually, the scientific research about supermaximum security confinement contradicts that assertion. The supermax was invented during a time of out-of-control violence in our prisons, the 1980's. The idea was to isolate "the worst of the worst" so that the prisons would become less violent. By now, some very convincing research proves the opposite: Locking certain prisoners up in long-term isolation does not reduce the violence rate. Far from it. I was part of developments in the Mississippi DOC, where we proved that drastically downsizing the supermaximum Unit 32 of Mississippi State Penitentiary at Parchman resulted in a decreased violence rate throughout the DOC and an impressive reduction in disciplinary infractions for the prisoners released from SHU and sent to general population.1

1. Due Process. In Wilkinson v. Austin, the U.S. Supreme Court established that supermax confinement constitutes an "atypical and significant hardship," and therefore prisoners are entitled to a "due process" hearing prior to being consigned there.2 What is due process? Usually due process, for example in criminal trials, requires at minimum that the defendant be given careful notice of the charges and evidence against him, be able to confront witnesses and rebut evidence against him, he or his attorney are given an opportunity to present the defendant's explanation why he is not guilty, and the evidence must be considered by a relatively impartial judge or jury ("the trier of fact"). This is a far cry from the classification procedure, termed "gang validation," that sends prisoners to Pelican Bay and other isolation units in California. Many of the prisoners consigned to the Pelican Bay SHU, some from the day it opened in 1990, have had no disciplinary write-ups, and caused officers no problems for many years. Yet they are kept in isolation. A Bill could require due process in the consignment of prisoners to long-term isolation as in the SHU at Pelican Bay, and spell out the requirements of due process utilizing the Supreme Court's ruling in Wilkinson - as Ohio and other states have done.

Many states use isolation or segregation as a corrective, targeting rule-breaking and unacceptable behaviors. New Mexico & Indiana, for example use their SHU's to improve behavior. In those two states, prisoners who get a certain number of disciplinary infractions are sent to segregation for six months. That is considered a very long time to be totally isolated and idle, many prisoners crack under the strain. Pennsylvania, New Jersey and other states conduct gang "validations," but do not place validated gang members in segregation unless they commit unlawful acts. In many other states, as long as the prisoner is "ticket-free" for a certain number of months he spends in SHU, he will be released. A Bill could mandate that: I. the CDCR base classification to SHU on unacceptable behaviors that actually occurred, rather than on speculations about acts that might occur in the future; and II. the prisoners be given a determinate sentence to SHU, for example 6 months, with the proviso that the better-behaving prisoner be released (back to prison, after all, not to go home) after the sentence lapses.

3. Phase Programs. Phase programs are desperately needed in California's SHUs. Currently, the sentence is indeterminate, for many a life sentence to isolation, and there are no incremental phases where prisoners can earn alleviation of the most stressful and depriving conditions by demonstrating appropriate behavior. As an aside, I should say that this kind of "dead time" (indeterminate sentence, no phased incentives) causes despair, aggression & suicide. Contemporary prison suicide data includes a stunning statistic: Half of the suicides that occur in a prison system, on average, occur among the 4% to 8% of the prisoners who are consigned to segregation or isolation. We as a society need to ask ourselves, "what breeds such massive despair in prisoners?" And one of the outstanding stressors that we know from clinical research leads to suicide is the total isolation and idleness of long-term segregation. The legislature could pass a Bill mandating that when a prisoner's freedom is severely constricted in isolation, there must be phases that permit that prisoner to earn his or her way back to a modicum of ordinary prison life.

4. There need to be alternatives to de-briefing, for example a phased rehabilitation program where prisoners who had been associated with gangs can be re-integrated into the general population in prison as a non-gang member. Connecticut DOC offers such a program at Northern Correctional Institution. A legislative Bill could mandate that there be no requirement that prisoners wishing to depart from gangs inform on other prisoners; and the same Bill could require that a program be offered to prisoners who want to leave the world of gangs. I can describe the Connecticut program, and there are well-known experts on effecting termination of gang affiliations.3

Too often, prisoners are released straight out of solitary confinement to the community at the end of their prison sentence (this is called "maxing out of the SHU"). This creates huge problems for them in adjusting to community life, and needless to say the recidivism and parole violation rates for the group who "max out of the SHU" is extremely dire. Other states require pre-release re-socialization for prisoners who have been in isolation. For example, New York DOCS requires a six month pre-release program for prisoners in segregation, including supervised experiences in groups. A legislative Bill could require that prisoners who have spent significant amounts of time in segregation/isolation be placed in an intensive re-socializing pre-release program prior to the end of their prison sentence, designed to prepare them to succeed at "going straight" in the community after being released.

A historic wrong turn occurred in American penology in the 1980's. Unprecedented prison crowding (the prison population had multiplied 4 to 6 times in a decade) and forced idleness (rehabilitation programs had been downsized because legislators dreaded being accused in the media of "coddling prisoners") led to rapidly rising rates of violence and psychiatric breakdown in the prisons. Instead of arriving at the obvious correct conclusion (supported by scientific research at the time) that the crowding and idleness caused serious damage and needed to be reversed (for example, by removing low level drug offenders from prison and treating them in the community), and educational and training programs needed to be re-instituted and strengthened, corrections authorities instead opted to place the blame for the uncontrollable violence on a new breed of prisoners, "super-predators," and proceeded to place a growing proportion of those they vilified as "the worst of the worst" in round-the-clock solitary confinement. In California, the CDCR went overboard, with far more stringent and toxic restrictions than prevailed in many other states. Multiple courts have ruled that California's prison conditions constitute cruel and unusual punishment, but many of the toxic conditions still prevail, as evidenced by the valid complaints and demands of the hunger strikers at Pelican Bay State Prison. It is up to the legislature to intervene with legislation that can clean up the worst abuses of human rights and the Constitution.

Thank you for considering my comments.