30 th anniversary of the Irish hungerstrikes 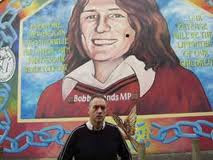 Screening of H3 with Séanna Walsh

H3 is an outstanding award-winning film made in 2001, written by former hunger striker Laurence McKeown and ex-prisoner Brian Campbell and filmed in the H Blocks, in the North of Ireland. An uncompromising film, made almost a decade before Hunger, it traces the context, circumstances and consequences of the policy of criminalisation of political prisoners, the refusal of the Thatcher Government to negotiate and the 1981 Hunger Strikes, resulting in the death of Bobby Sands and nine other Republican volunteers.
It will be followed by a Q&A on the legacy of the conflict and the 30th Anniversary of the hunger strikes in the North with Séanna Walsh.

Séanna is Chair of the Republican ex-prisoners group Tar Anall, Sinn Féin organiser in West Belfast and head of its Irish language department. He served 21 years in prison including the Cages, Long Kesh, with political status, in the H-Blocks on the blanket without political status and was vice OC to Bobby Sands, a close friend and confidante. Released as a result of the 1998 Good Friday Agreement he has been at the forefront of delivering for Republicans an alternative to armed struggle and a clear road map to end British Government interference in Irish affairs. The session will be chaired by Professor Phil Scraton, Queen’s University, Belfast.