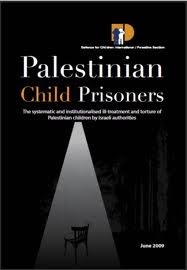 Palestinian Child Prisoners: The systematic and institutionalised ill-treatment and torture of Palestinian children by Israeli authorities

This report documents the widespread ill-treatment and torture of Palestinian children at the hands of the Israeli army and police force. It contains the testimonies of 33 children who bear witness to the abuse they received at the hands of soldiers from the moment of arrest through to an often violent interrogation. Children report being painfully shackled for hours on end, kicked, beaten and threatened, some with death, until they provide confessions, some written in Hebrew, a language they do not speak or understand. The report finds that these illegally obtained confessions are routinely used as evidence in the military courts to convict around 700 Palestinian children every year.

Once sentenced, the children who gave these testimonies were mostly imprisoned inside Israel in breach of the Fourth Geneva Convention where they receive few family visits, and little or no education. The report concludes that this widespread and systematic abuse is occurring within a general culture of impunity where in 600 complaints made against Israeli Security Agency interrogators for alleged ill-treatment and torture, not a single criminal investigation was ever conducted.

The report also contains recent recommendations made by the UN Committee Against Torture which expressed 'deep concern' at reports of the abuse of Palestinian children when it reviewed Israel's compliance with the Convention Against Torture in May 2009.