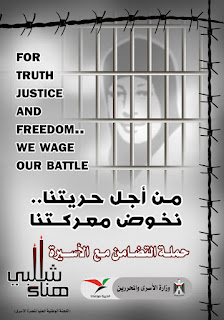 Hana Shalabi on Her 34th Day of Hunger Strike: Israeli Prison Service Refusing to Transfer Her to Hospital Despite Immediate Risk of Death

“To all the free and loyal Palestinian people, I direct my words to you—while I and all my brothers and sisters in the occupier’s prisons are on hunger strike, we call on you to continue your solidarity and for the issue of prisoners to be on the highest priority list […] I call on  foreign states to continue action in applying pressure [on Israel] towards the release of all our courageous prisoners.”
-Hana Shalabi, 16 March 2012   Ramallah-Jaffa, 20 March 2012 –

Addameer,  Physicians for Human Rights-Israel (PHR-Israel) and Al-Haq express their grave concern for the health of Hana Shalabi, who is at immediate risk of death on her 34th day of hunger strike.
As of today, the Israeli Prison Service (IPS) is refusing to transfer Ms. Shalabi to the hospital, despite yesterday’s urgent reports by her doctor that she should be transferred immediately. Addameer, PHR-Israel and Al-Haq are certain that the quality and facilitation of medical care administered by the IPS is not adequate to attend to her current condition. Meanwhile, today, the Israeli military judge of the Court of Appeals postponed yet again making a decision regarding Ms. Hana Shalabi’s four-month administrative detention order following a meeting with her lawyers and the military prosecution.

Following an urgent report issued by the PHR-Israel doctor who examined Ms. Shalabi yesterday, 19 March, which concluded that Ms. Shalabi is in immediate mortal danger and should be immediately transferred to a hospital for close observation, Ms. Shalabi was transferred to the civilian Meir Hospital last night. However, for unknown reasons, she was not admitted to the hospital and the IPS transferred Ms. Shalabi back to the IPS medical center in Ramleh Prison Hospital later on the same night. Ms. Shalabi’s doctor was not informed of this transfer until today. Addameer, PHR-Israel and Al-Haq share fears regarding the adequacy and timeliness of the medical care available in Ramleh, especially given the growing concern about her rapidly deteriorating condition.   Today, the chairman of PHR-Israel has been pushing on all possible fronts for her immediate transfer to a hospital.  When he asked the IPS why they are refusing to transfer her, IPS Chief Medical Officer Dini Orkin informed him that the commissioner of the IPS—who is not a medical official—said that Ms. Shalabi’s doctor would have to return to Ramleh and provide another medical opinion before they would even consider her transfer, despite her urgent report from yesterday. Furthermore, and even more troubling, Ms. Shalabi reported to the PHR-Israel doctor that during her various transfers yesterday, she was handled violently, including being “dragged across the floor”. Her PHR-Israel doctor is particularly worried about Ms. Shalabi in light of this mistreatment, which undoubtedly is having an effect on her already-fragile state. Any further deterioration or aggravation of her condition, including emotionally, could cause a heart attack.   Addameer, PHR-Israel and Al-Haq also condemn the IPS’ latest actions regarding its role in pressuring Ms. Shalabi to end her hunger strike. During a visit by Addameer lawyer Muna Neddaf on 16 March, Ms. Shalabi stated that the IPS’ attempts to get her to end her hunger strike have included continuing to deny her family visits for the next month from 13 March; pressure from a Muslim cleric who is a member of the IPS “Ethics Committee”; and attempts to undermine her confidence and trust in her PHR-Israel doctor, including providing her with misinformation and telling her the doctor does not care about her. The IPS continues to consider force-feeding in disregard to the principles of medical ethics and the guidelines of the World Medical Association and the Israeli Medical Association.   In legal proceedings, today’s meeting followed her original appeal hearing on 7 March, during which the military judge stated that he would make his decision on 11 or 12 March in order to give the military prosecution ample time to “revise its position” and to allow for any negotiations on a “deal” between the military prosecution and the committee of lawyers representing Ms. Shalabi. He noted that his intention was for any such “deal” to occur at the Appeals Court level and not after, as in the case of Khader Adnan. No decision was made on 11 or 12 March in this regard. Today’s meeting with the Israeli prosecutor and Ms. Shalabi’s lawyers was called for by the military judge to discuss developments on the matter. However, the negotiations have not resulted in any agreement as of today. As a result, the judge stated that he will be announcing his decision soon, but did not specify when. The judge requested a detailed medical report on Ms. Shalabi’s health condition, which has been prepared by the PHR-Israel doctor and submitted to the court.   Commenting on the discussions, Addameer lawyer Mahmoud Hassan stated that “the Israeli military prosecution’s concern is to get Hana to end her hunger strike as opposed to seriously considering the reasons underlying Hana’s protest, including the infringement on her right to fair trial and right to an effective defense.”   At least 23 other Palestinian political prisoners are currently on hunger strike to protest the use of administrative detention as an indefinite form of detention without charge or trial, including 72-year-old Palestinian Legislative Council member Ahmad Al-Hajj Ali. Since the beginning of March, a number of administrative detainees have refused to acknowledge the military court and refused to participate in legal discussions of their cases. Due to Israel’s use of administrative detention, and the lack of due process afforded to Palestinians in the military court system, a hunger strike serves as a non-violent and sole tool available to administrative detainees and other political prisoners to fight for their basic human rights.   Addameer, PHR-Israel and Al-Haq are gravely concerned for the life of Hana Shalabi and call for her immediate transfer to a hospital, with adequate care that is uninterrupted by frequent and unnecessary transfers. Addameer, PHR-Israel and Al-Haq also appeal to the local and international communities to take every action in applying pressure on Israel to seriously address the underlying reasons behind the growing protests of Palestinian political prisoners and to end the large scale practice of internment without charge or trial. This practice is indicative of willful deprivation of the right to fair trial afforded to protected persons, in addition to the well-documented systematic policy of torture and inhuman and degrading treatment as methods of intimidation and coercion that Israel employs.     Background:   Legal information:
Medical attention:
Publié par Luk Vervaet à 15:33